Bruce Springsteen back to Australia in 2014. And this time he's coming to Perth...


Fans of Bruce Springsteen who missed out on the rocker’s Australian tour could be in luck with reports The Boss is returning down under in February next year with another tour starting at Perth Arena.

Rumours have been circulating fan forums since the end of the Springsteen’s Wrecking Ball tour in Australia in March that he would return within a year after a series of 10-sell out shows.

On Wednesday night fan sites waiting for an announcement went into meltdown after a release from Triple M radio station said Springsteen would play Perth Arena on February 7 next year before heading around the country for another tour.

The webpage was quickly taken down moments later, but a search on Google still showed results that the radio station and Frontier Touring had details of the 2014 concerts.

Facebook group Bruce Springsteen Perth, previously a campaign group to bring The Boss to WA, even managed to collect screen grabs of the website listing dates for Perth, Adelaide – which also missed out on this year’s tour, Melbourne, Sydney, The Hunter Valley and Brisbane.

The Triple M web leak also suggests that the reformed Hunter & Collectors will support Springsteen for the Melbourne show, listed for AAMI Park. 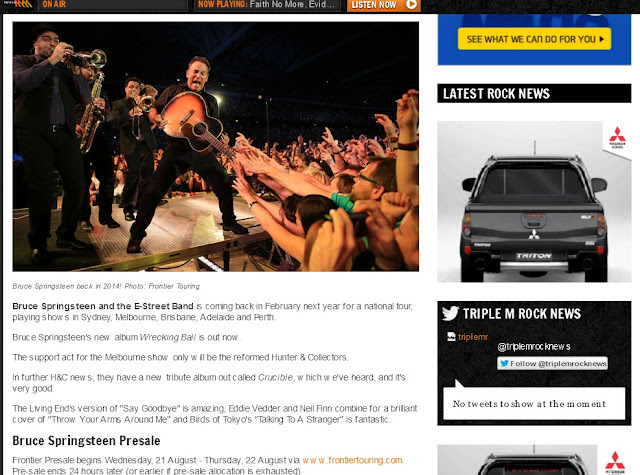 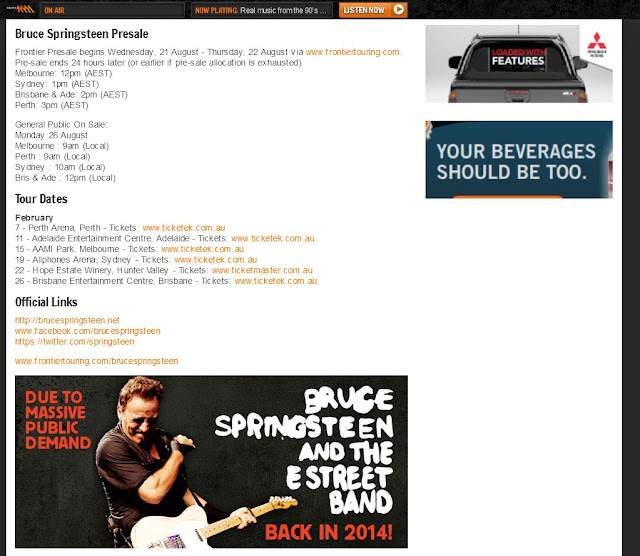 "Hiding on the Backstreets..."

We Take Care Of Our Own

The Ties That Bind

Add me to your reader